Never Give Up and Never Quit Doing Good!

is a story of hope and perseverance for anyone who may be facing difficulty, and an encouragement for those who are doing good in the World to “Never Give Up” and “Never Get Weary Doing Good”. It is based from the all time favourite Bible Story, The Story of Joseph.

The Story of Nicole

There once was a young girl, Nicole who lived in a lonely house, some distance from her village. She had been orphaned and her next of kin had abandoned her when they realized how much she was in distress and always asking for help. Due to the problems that she encountered, Nicole moved and went to live alone away from the village. Weeks later, Nicole decided that she would fetch water for the elderly everyday as well as prepare meals for them. Moreover, she began collecting plastic bags and burning them away from the village in order to ensure a healthy and unpolluted environment. One thing that astonished her was that nobody appreciated her work and all that most people would do was discourage her course. An amazing thing about her was that she was very resilient; she couldn’t change her mind at any point. Seeing people’s smiles on people’s countenances was her mission!”

The Story of Joseph in the Bible

Just like Nicole, sometimes we go through hardships even while we do good and we get disheartened. That’s what we sometimes go through and it’s actually not easy. I am so excited to have started ‘Journey Through The Bible’ once again and as I read the story of Joseph, that’s the same picture that came to my mind. Joseph was blameless. He was that favoured lad whom God loved and treasured so much. Nonetheless, from his family, to his life at Potiphar’s house and even to prison; all that Joseph went through was really discouraging. Even the butler whom Joseph had interpreted his dream was freed and forgot Joseph in prison (Gen 40:23).

The story of Joseph has taught me that God’s goodness never comes to an end! How we will experience God’s faithfulness now can’t be compared to what we are yet to encounter later on in life. We can’t even express it because it’s magnificent. It may hurt right now but let’s learn from Joseph. We will walk as favored children of God because we long to live a blameless life. By blameless I don’t mean without sin but acknowledging who God is in our lives and allowing Him to be the light to our way.

Never Give Up and Don’t Get Weary Doing Good

In this season, I pray to walk in God’s light as well as to stick to what is good at all times. God’s word encourages us to never get weary of doing what is good. A lesson that I learnt last year and I pray the same prayer to date is not to listen to what the world says or terms as ‘important’ and ‘trendy’ but to listen to only one voice: God’s.

Have you had such experiences in life? Have the hardships pulled down your spirit and you can’t help but give up? Dear friend, learn from this as well and stand tall because God’s hands hold you still and there is nothing that the devil can do about it. Have no other options: do good or do good!

Galatians 6:9, “So let us not become tired of doing good, for if we don’t give up, the time will come when we will reap the harvest…” 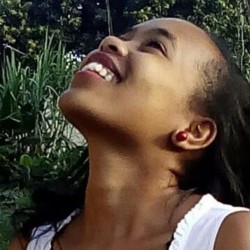 Imani Njeri
Imani is a Kenyan PR professional and a Christian blogger. She loves all things music, art, nature and photography.

Stone Vs Clay: Pick One

Of Life, Moments and Grace..

What a Godly Woman Wishes ALL Men Knew – Part 2

What a Godly Woman Wishes ALL Men Knew – Part 6

What a Godly Woman Wishes ALL Men Knew – Part 1

What a Godly Woman Wishes ALL Men Knew – Part 3